Marisha ThomasThere’s this feeling of smallness – that your world is confined to secrets you tell in your diary, or to the few people you know in real life that are brave (or perhaps foolish) enough to come out – that I identify as a part of my theory on queer orphanhood.
You spend so much time contemplating your identity that you don’t have time to wonder about people out there. There’s a kind of spiritual displacement in being queer and young.

Queer people are no secret to ourselves; only to each other.

The first time I can remember really encountering another queer person, my mother and I were going through old pictures together. I must have been 11 or 12 years old. My mom pulled out a sepia-toned Polaroid of this pretty dark-skinned man, an older cousin on my father’s side. When she told me about him, I said, with a smile on my face: “I didn’t know I had gay cousins like that!”

There was something about that – some extra flavor, the fact that we were more than just a character in a show or the few girls I knew in middle school who were bi. That photo of that cousin opened the world up to me. I found out our world was bigger than what was only in front of me. And it was natural. It was kin. How to articulate this feeling.

“Queerness”, it can be argued, has long been one of the defining factors of queer experience.

The double-sided coin that is an age-old label; I imagine, maybe because of my own feelings of isolation, that all LGBTQ+ people have felt strange.

The unplaceable feeling of an unpleasant familiarity. I feel different, but I don’t know how to explain it.

When I encountered the differences between myself and boys, saw and felt their resistance toward playing with a girl, I could go to my mother, my aunt, my sister, and they’d relate the old cisnormative spiel about Jupiter and stupider, college and knowledge. When I tried to articulate the difference between myself and non-Black children, again my family was there to unfurl the scroll of history to me. But since childhood, I have had no immediate references in my life to talk about this other thing.

I know I speak for many when I say our community is sorely missing its elders, their work, and their voices. I’ve been reflecting on this idea of queer orphanhood lately. The lack of a guiding presence leaves us to struggle without knowledge that is often passed down from young to old. Many of us are familiar with the history that opened this void: In the 1980s, the U.S.’ greater LGBTQ+ community experienced a massive loss due to neglect and rampant homophobia under the Reagan administration while the HIV/AIDS epidemic claimed countless lives, leaving an equally massive gap between the queer youth of today and the lost generations of yesteryear. One of the effects I see of this first-hand in the ever-evolving discourse is the repeat of oppressive rhetorics and other bad habits. Without our elders, we continue to argue who can reclaim which slur, or whether this group or that group truly belongs in the community. Some of us try to take up more space than others, pushing the other down in an attempt to gain status in the cishet world. We push each other away, the space between us filling with our own hatred. But more than that, the chasm echoes, I think, with loneliness. Nobody wins when the family feuds.

What is the antidote to queer loneliness, queer bitterness, or “queerness”? To whom must I appeal to become knowable?

There’s this feeling of smallness – that your world is confined to secrets you tell in your diary, or to the few people you know in real life that are brave (or perhaps foolish) enough to come out – that I identify as a part of my theory on queer orphanhood.

You spend so much time contemplating your identity that you don’t have time to wonder about people out there. There’s a kind of spiritual displacement in being queer and young.

I wondered so much about whether I really liked girls; how could I really know if I had never liked a girl before? Knowing that there is such a thing as a girl who likes girls is an entirely different endeavor from knowing what that feels like first-hand. In his 2019 coming out video, Dan Howell speaks to being exposed to the word “gay” for the first time when another boy bullied him as a young child, long before he experienced his first crush on a boy. What is it about learning to feel ashamed of your identity before you begin living it?

In my second year of college, I was loudly and happily out to everyone in my life that I wasn’t related to. Each time my mom called me to check in, I gracefully avoided revealing my role as president of our GSA, The LGBTeam. Always one to mix work and play, I spent the year racking up events with my fellow officers that had some of the best attendance numbers of any other club. I was living my best queer life.

In January of 2019, a staff member reached out to me to set up an event that marked a major step in my journey as a queer person. I was pointed towards Kristo Gobin, a professor at another nearby university and a performer known for his one-man act in “That’s So Gay: The Play”, a show that details his coming out story, his journey through self-discovery, and his battles with bigotry. I imagined this show would be a cute little show-and-tell moment that would make for an entertaining evening. Kristo’s story ended up being more than just a campy feel-good story. It opened with a presentation on the spectrum of identity; representing all the life that exists between binary categories of man and woman, gay and straight; he told us about his experiences with shame and bullying.

The part that especially sticks out in my mind was the part when he described his memories of being at the first successful Pride parade in Croatia, the place of his family’s heritage. It was 2002. According to news coverage of the event, there were about 300 people in attendance, all wonderfully united to celebrate their authentic selves. As Kristo told it, as the procession marched through the streets, they began to hear the chanting of a violent hate mob shouting homophobic slurs and other bigoted slogans. He described an adrenaline-fueled battle as people ran for their lives, looking for places to hide while they waited for police. While many managed to leave unscathed, the message was clear: Zagreb was not ready for its queer community to come out.

At the end of the show, Kristo opened the floor to audience interaction. After allowing a few other voices to take space before my own, I posited my question – more a confession. I began by asserting that I meant no offense, but I felt it was necessary to bring my story to a “queer elder” (I won’t guess his age, but I think Kristo is around the same age as my mother). I wasn’t out to my whole family by that point – just a couple of my closest cousins, and even then the last time I spoke to them about my identity, I was still going by another label. I told Kristo (and everyone else present at this semi-public event) that since I was younger, I hated my parents. I resented them for being closed off to me, for showing favoritism toward my sister, and for not showing me the love I deserved when I needed it most. So I closed myself off to them. Swore revenge against them in the form of secrecy; if they weren’t going to love me, I would never allow them to get to know me. They would never be allowed to love me as I am.

I don’t even remember if I asked a question; it had turned into a total venting session. Kristo grinned and thanked me, and later when the Q&A section was over, came and gave me a hug. I remember being surprised when he told me that he experienced exactly what I had described. He seemed so at ease, so well-adjusted, or at least had enough distance from such painful memories that he could be open about it.

Were other people really so full of petty rage as I was? Was I not the only one?

Kristo, still in his joyful state, asked me if I knew what I had done. Reflecting on it now, I think he was trying to impress upon me that I had moved something or someone – maybe my audience, maybe himself, maybe me. His reply to my story, something along the lines of letting go and allowing myself to be free, was lost in my embarrassment. I had been trying really hard not to cry. I had opened myself up to something I didn’t even know was happening inside me. My child self had reached out from inside my heart, raw and needy. Maybe I did have to let this go, I thought.

Connecting with our community

I’m so thankful for the vulnerability Kristo shared with us that day. It gave me the push I needed to begin healing. Though the pain isn’t completely gone, I’m happy to say that I am out to my mother and that I’m approaching the stage where I think I can be more open with people about my truth.

In honor of that connection, I want to spread the love by sharing some places where people like us can find ourselves – in history or in real-time. Scarleteen’s message boards can be helpful to those looking to connect, among other sources. Finding ways to make these connections can be difficult, but not impossible. Through these, I hope you discover your own small epiphanies and begin to feel less strange. 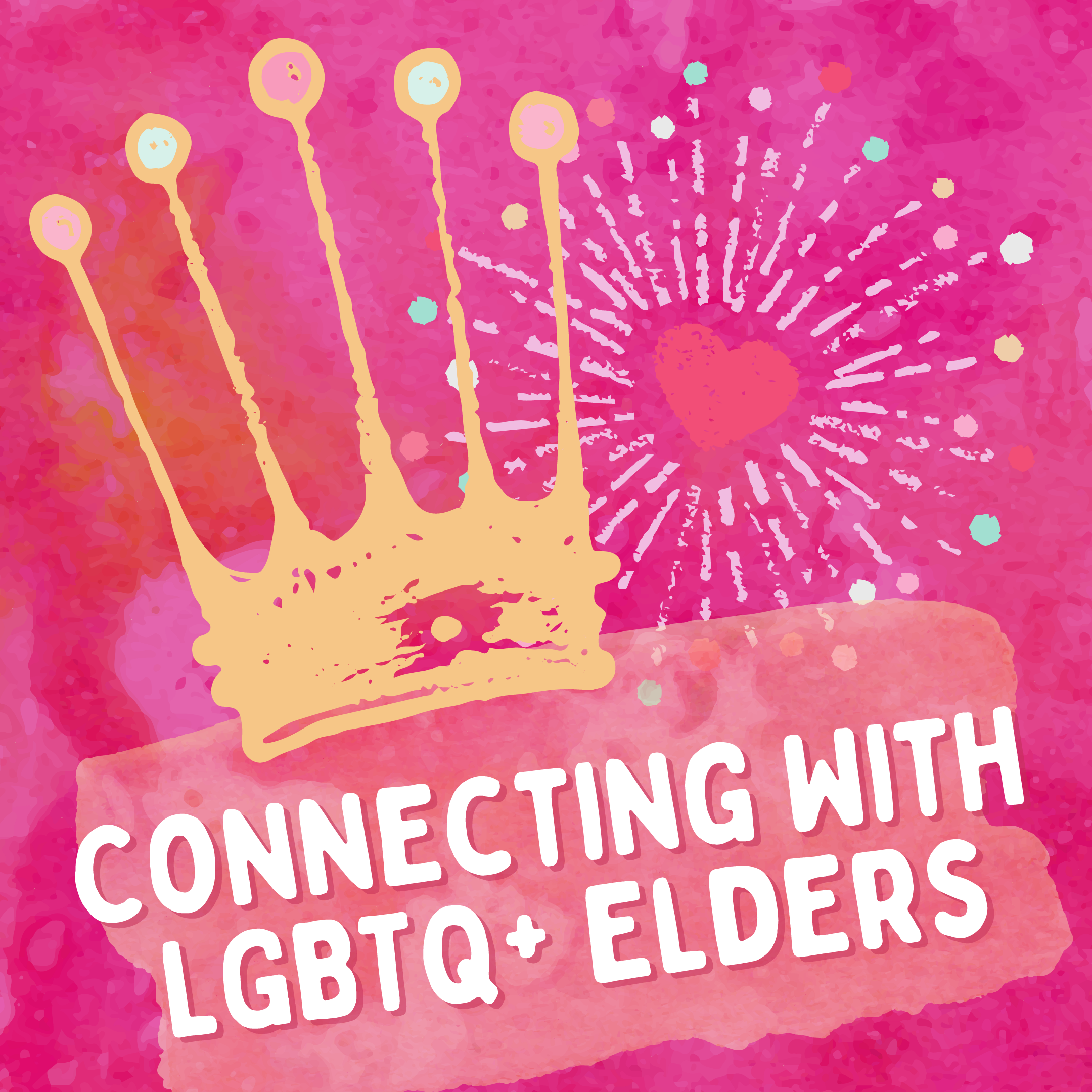