Jacob MirzaianSorry-not-sorry, but this sucks! I know it and you know it; maybe it'd be best if we let it show.

Sorry-not-sorry, but this sucks! I know it and you know it; maybe it’d be best if we let it show.

The ‘latest crisis,’ whatever it was at the time, has always been a big part of teen, tween, and young adult existence. Even the category of ‘teenager’ can be linked to the set of crappy political and psychological crises that flooded the anxious minds of Western societies after WWII. For some of my colleagues it was the AIDS crisis; for me it was 9/11 and its aftermath; for many of you it will be COVID-19. How are you supposed to deal with that?

The worst piece of advice I can possibly imagine is the one I hear most often: “Be positive!”

“Chin up!”
“At least you’re young!”
“We owe it to essential workers to be strong, and stay positive.”
“It might be hard now, but it’ll be ok in the end. It’s all a cycle. You’ll see.”
“Don’t worry, it only affects people with pre-existing conditions.”
“This is no time to be negative.”
“At least the crisis is bringing the nation together.”
“What a great opportunity to rediscover baking?”

I know – it’s ironic to suggest that I have a solution that’s good or helpful while I’m dissing all supposed goodness in the world, but here’s my tuppence:

I’m not going to pretend everything doesn’t suck or wax poetic about the greater good or silver linings to a global pandemic, or pretend that the light it shines on the faults in our broken systems is helpful. It’s not; those faults were already documented and have been ignored.

So what do I suggest? I say: save yourself the energy drain of building a perky plucky persona and be as miserable as you like! You are already worthwhile, you are already generous, supportive, caring, and compassionate. Showing high spirits in hard times doesn’t help you to do any of the acts of kindness, wisdom, or survival that come from your qualities.

However, resisting and saying ‘no’ to the enormous weight of pressure to be or appear positive is not easy. I have found it extremely difficult. I keep finding myself, wracked with guilt, in the gap that lies between how I really feel and the persistent  expectation that I might squeeze some sort of goodness from this poisoned fruit.

With all this ‘free’ time, why haven’t I finished my job applications? Or become a successful podcaster, poet, or private tutor? Why isn’t my bedroom clean? Why did I cringe at 8pm every day while half the UK were opening their front doors to “clap for the National Health Service?” Now that I’m away from the usual catalysts of my mental illness, why am I ‘doing badly’ at self-care?

Stop this thought pattern now. Once more with feeling, here’s another reminder for me, you and all your friends and family:

Everything sucks, and that means misery. Being miserable, and the effects of being miserable, abound. So of course I didn’t clean the house, or get out of bed, or write a novel!

If you also, frequently, need help to absorb that truth, to save yourself from that self-criticism, I can attest to the benefits of creating a mental list or writing an actual list of what sucks. Here are a few things on mine:

You know death: the inescapable black hole which troubles the most enlightened of minds. It’s in front of us daily, and, as we’re told, haunts every in-person interaction that we wish we could have.

Thanks to slow reactions from political leaders, and the indifference of nature at the microscopic scale, a virus has infected and killed well over half a million people worldwide, at time of writing. The possible deaths — and for some of us, actual deaths — of many of the people we care about and fears for our own safety weigh heavy on all of us.

Nationalism celebrates the big idea of a national identity above everything else. The idea of a simplified and idealized typical American, or British, or Indian, or Chinese family to represent the nation is what matters. Racism? That can wait. Sexism? Huh? People whose families, lives, and sexualities don’t fit? Stop making things weird. Working because you have no choice? Don’t say that, we only care about heroes! Salute the flag? Very important! YUCK.

Just as wars result in a ‘Rally round the flag’ effect, wartime leaders enjoy bumps in their ratings, and normal soldiers are made into idols (who are later neglected), this pandemic is having a similar effect. We have watched our political leaders be praised on TV for ‘joining the nation’ on their doorsteps and clapping for National Health Service workers who just a year ago were being demonised by newspapers and politicians for demanding better conditions and funding – they still lack the safety equipment and testing they need.

You can’t eat applause, you can’t use it to test for COVID-19, just as ‘Thank you for your service’ doesn’t provide safer employment options for underprivileged youth, or mental health support for homeless veterans.

There are other ways to connect to people. A shared complaint and dedication to our own values can connect us through the troubles we encounter in a way that is much more inclusive and real. So I don’t believe in fake cheeriness as a ‘national duty’ – it has only ever made me feel weird, alone and ‘wrong’. That sucks.

Thing That Sucks 3: Distress and Depression

Did you have mental illness before the pandemic lockdown crisis? Well, congratulations, here’s some more. The drivers of mental illness include traumatic experiences at home, financial hardship, and lack of control over your own life. Predictably, domestic violence is up and job losses have been widespread. As for lack of control, being told you are not allowed to leave your home is textbook.

Achieving social distance when your housing is poor quality, you have a large family in a small space, or you live in an abusive or otherwise strained relationship with partners, family, or housemates is a massive ask. Being the perfect example of a public health role model isn’t something we can all actually do. Being under 18 and/or disabled may already include a long list of pressures that make depression a struggle. Some of us may need more help than we needed before, but with less access to that help and an explosion in the size and persistence of our symptoms. That sucks.

Thing That Sucks 4: The Future

Recovery takes time. A lot of it, and we do not always know what the effects will be of a crisis on our communities, our psyches, or the political realities we will be left with. Many governments have pushed through policies which would not have passed during gentler times. We are yet to feel any of the long term effects of these. I have no doubt that our newly proven capacity for funding healthcare will be argued as ‘only a thing for exceptional circumstances’, and that many of the world’s worst leaders will congratulate themselves for being leaders during the pandemic.

Many of us will lose grandparents and loved ones, and many invaluable intergenerational conversations will never happen. What effect will that have on cultural memory?

This is exhausting now, and I dread to think of what issues might arise in the coming days from the exhaustion of a traumatised, weakened, and bereaved society. That sucks.

Constant, if sometimes subtle, reminders that we should be upbeat or surviving with a sense of pride or dignity is alienating and puts the lid on many conversations that we need to have, in order to know that we’re not losing our marbles.

For me, there is an irony to what does help me get through. I do not find the ‘positivity’ of pretending that this doesn’t suck to be optimistic. This is far from the best version of events. If you really can imagine something better, then this world is frustrating, and you’re likely angry about it.

That’s why I feel that real optimism is something else. Those of us who do our darndest to work towards a better world, including protesters who take to the streets, are optimistic about what the world could be, not what it is, and that comes with pain and disappointment. If you’re miserable, it says to me that you are on the right track. I hope that, for all our sakes’, there are times when we don’t feel miserable, but my optimism also says that you, in your negativity, are the closest we’ll get to an honest and realistic recovery from our current struggles and our best hope for the future.

You, my companions in this dire gloom, are likely struggling, facing poor sleep, depression, and disappointment. This isn’t a fault in you; it’s a fault in everything, so put the blame where it belongs, and let yourself be as you are.

Let us join together, in optimistic misery, and say a final time, let a thousand wolves howl, all together now: 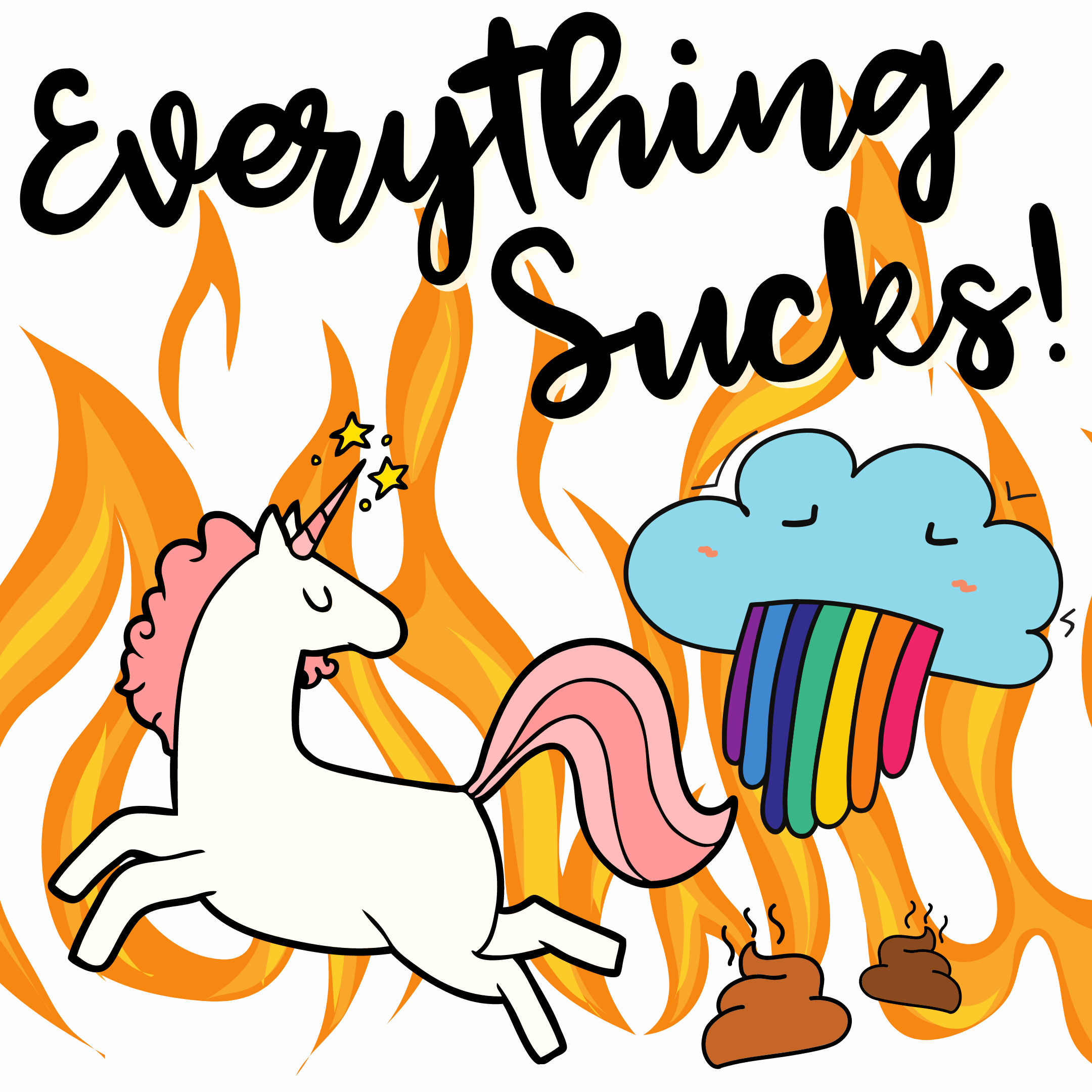