Adam EnglandEven when you're with a supportive partner, coming out as a bisexual guy to a girlfriend or another kind of woman partner isn't always easy and might feel awfully intimidating. Adam England has some support, help and solidarity to spare.

In my first relationship, I wasn’t entirely sure of my sexuality, but I knew that I wasn’t solely attracted to women. I never spoke about it to my girlfriend, though.I put it to the back of my mind. It wasn’t like I wasn’t attracted to women, so I just didn’t see any point in communicating my bisexuality with her.

I wasn’t out to anybody at the time. Being at school, where casual homophobic joking was commonplace, I was worried about the wider reaction – particularly as someone not seen as particularly ‘masculine‘ in the first place.

However, I later realized that I was squashing a part of my identity – I never explicitly said that I was straight, but heterosexuality tends to be treated as the default setting, and as I had a girlfriend I was essentially able to pass as straight.

If I’m being honest, I had no idea how I’d even bring up the subject of my bi-ness with girlfriend. She’d never made any homophobic or biphobic comments that made me think she wouldn’t take it well, but nonetheless I obviously didn’t want to risk it.

It might go without saying, but being bisexual often brings challenges that straight people wouldn’t even begin to consider. Neither gay nor straight, you can feel as if you’re stuck in the middle. People like binaries, and will often prefer to allocate people into boxes labeled ‘gay’ and ‘straight’, with no concern for those who lie outside.

We broke up after about seven months. It took me another few months to actually come out after that.

In my relationships since, I have usually been open about my bisexuality. Many of the women I have been romantically or sexually involved with have identified as LGBTQ+, which undoubtedly made it easier for me to be myself. But I’ve been with straight women too. Many other bisexual people will find themselves in relationships with straight people as well.

An increasing percentage of people are now, like me, identifying as bisexual, suggesting that it’s becoming less stigmatized. People are now more comfortable to come out than perhaps they would have been even five or ten years ago, which can only be a good thing.

However, that doesn’t mean that prejudices don’t remain. You don’t need me to tell you that some people still think being bisexual is a cover for being “properly gay”, or a label that people use to “sound cool”. Sometimes, people are hesitant to come out because they’re worried their partners will assume they’re non-monogamous, or that they want something they can’t give.

Biphobia and homophobia are still widespread, and for this reason, men in straight-passing relationships might decide to stay closeted, even to their partners.

“As well as experiencing the same challenges that lesbian and gay people face, like bullying and discrimination, bi people’s identities are often erased, ignored or stereotyped, which can make it harder for them to be open about their sexuality,” says Jeff Ingold, Head of Media at Stonewall.

“Assumptions about bi people are often gendered. Bi men are frequently seen or depicted as going through a ‘phase’ on the way to coming out as gay. It’s no wonder three in ten bi men say they can’t be open about their sexuality with any of their friends.”

It’s important to remember that bisexuality is a spectrum. Being in a relationship with a partner who’s a woman doesn’t make you straight, but that also doesn’t mean that you’re going to leave them for a man. You can go through life having only women or only men as partners and still be bi. The notion that bisexual people should be ‘half-and-half’ is damaging and only serves to reinforce a rigid gender binary.

Like in my first relationship, you might be bi but not out to your current partner. Maybe you’ve been exploring your sexuality and didn’t realize you were bi until after you got with them, or maybe you simply just haven’t told them because you’re unsure how to bring it up, or are worried about their reaction. Perhaps you’re not yet out to anybody and are worried about what coming out to your partner could mean, or you’re worried that telling somebody else – even your partner – makes it feel more ‘real’, which may not something that you’re ready for yet.

When it comes to telling your partner, you’re likely to have a few worries. Maybe your partner will be a little upset that you never told them about your sexuality before – it’s only natural to feel like that, so don’t be surprised if they do. They might also be concerned that you’re using them to cover up your supposed homosexuality, that they’re just a placeholder until you find somebody of the same gender, or that being bi could mean that you’re not monogamous – however unfounded these worries may be. However, if you can talk through these fears based much more on stereotypes than realities, they should come round.

Thomas [not his real name] didn’t come out to his then-partner until they’d broken up, only mentioning it a month later: “For some reason her reaction was shocked, but not bad,” he tells me, and now he doesn’t see the harm in coming out while in a relationship.

“If you’re in a relationship your partner should accept you for who you are and not judge you on your sexuality,” he continues. “If they do, they aren’t worth your time; you’d be much happier without them!”

If you’re nervous about coming out, or unsure how to broach the subject, don’t be afraid to speak to other bisexual friends, or look for advice online. The r/Bisexual subreddit has over 350k members and features a whole load of posts from bisexual people, and there are plenty of Scarleteen resources to help you out too, including the Scarleteen forums.

There are quite a few posts on the r/Bisexual subreddit and those forums from people talking about their experience of coming out to their partners, and the overarching theme is that their partner was accepting. Sure, it might have been a surprise for them, as it’s not something that tends to come out over the dinner table, but they were able to deal with it well.

Ultimately, the best thing to do is to be upfront and honest. If you’re in the early stages of a relationship, I think you should rip the Band-aid off and tell them – if you tell your partner further on down the line, it might look like you’re hiding something.

As Thomas said, do you really want to be with someone who won’t accept you for your sexuality? Even if the worst happens and your partner doesn’t react well to the news, at least you know now rather than later on, when things are perhaps more serious.

The conversation in which you come out to your partner won’t be easy, and both of you might struggle. It could set off insecurities in your partner about their body, for example, so be prepared to offer reassurance. They might have questions, which, for both of your sakes, I think you should do your best to answer honestly. Some of your partner’s questions or worries might also be hurtful to you, but do your best to understand that they’re unlikely to be coming from a place of malice. However, of course, you’re not obliged to sit there and listen to things you find hurtful – especially from somebody who means a lot to you. If you’re starting to feel upset, or even unsafe, you don’t have to remain in the conversation; don’t be afraid to set boundaries to protect yourself.

If you’ve been with your partner for a little longer, you might feel a little more conflicted about telling them. Try putting yourself in their shoes, and think about how you’d react if your partner told you that they were bi. Presumably, it’s not something that would bother you. Who’s to say that they wouldn’t feel the same way? You might need to rebuild some trust again, however. Even though you weren’t deliberately out to lie or deceive, your partner could see it as you hiding the truth.

Maybe you’ve known that you’re bi for a while, but you’ve not yet come out to anybody. Coming out to your partner can be an even bigger deal, but it’s often worth it. Ultimately, you want a partner who doesn’t invalidate your identity. While it’s a good idea to communicate and be open with your partner, it’s not and should not be your job to educate them. Your job is not to manage their emotions either.

Of course, sometimes couples will break up. The sad reality is that, for some couples, one of them being bisexual is enough to cause a breakup. This might be because your partner feels like trust can’t be rebuilt, or because they won’t accept your identity.

Hopefully you won’t be in this situation, but if you are, it will probably hurt for a while. What you need to remember is that if someone has that much of an issue with who you are, they aren’t the right person for you, clearly. There are, however, plenty of people out there who will fully support you and your identity, and you will find somebody else if you do decide that you want another relationship.

You’re not obliged to come out to anybody. By all means, put yourself, and your safety and other needs first – just remember that you have the right to feel comfortable with your own identity and to identify yourself as you see fit.

As Jeff explains: “It’s important not to assume what someone’s sexual orientation is on the basis of their current partner, or to pressure people into coming out when they’re not ready. Remember that bi people exist, and we all have a role in challenging the stereotypes and assumptions that face bi people. The best way to support all LGBTQ+ people is to create accepting environments where everyone feels free to be themselves.” 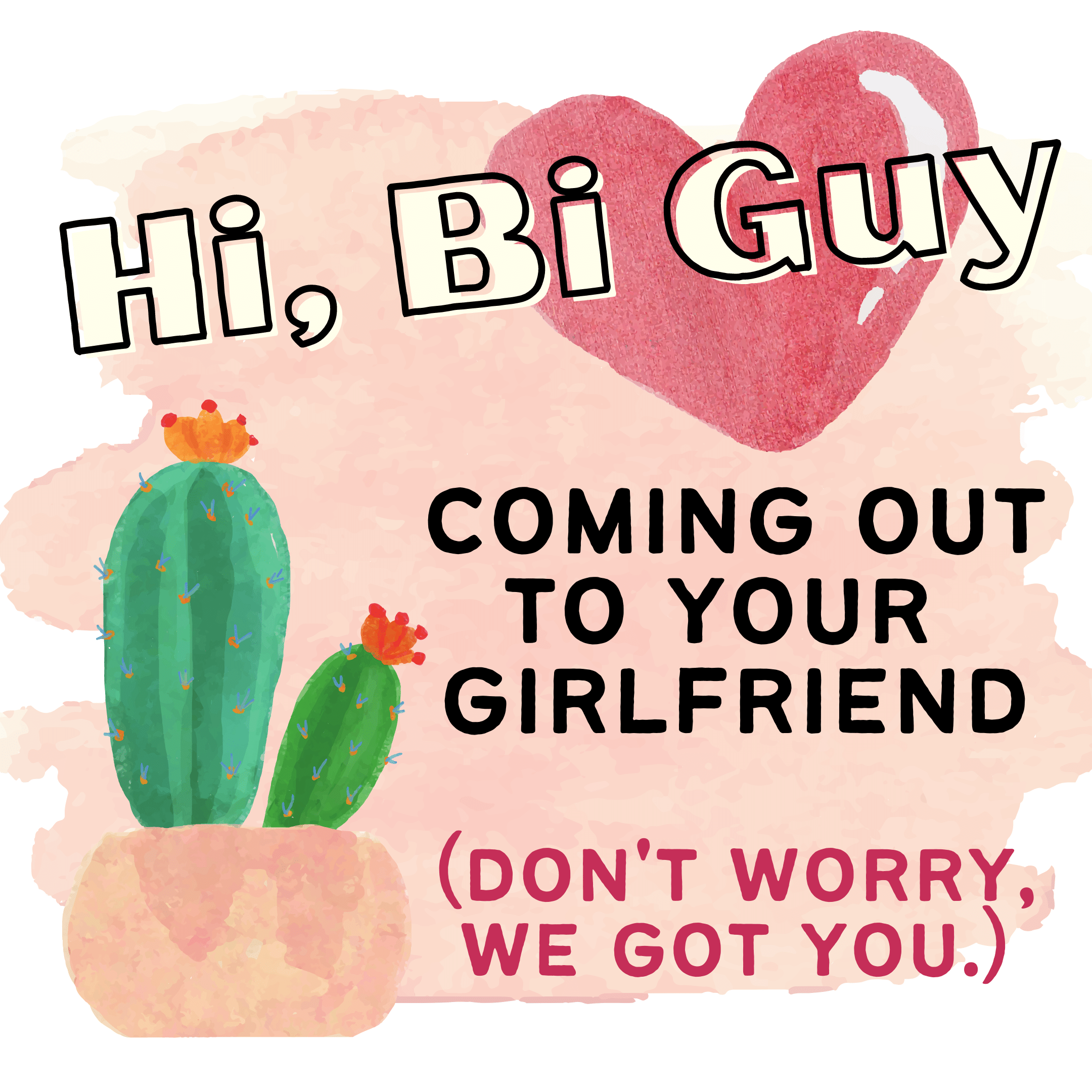