Emily JoyMasturbation is a topic you might need to do a little extra work on defining your values around if you grew up in purity culture being told that it was a sin—and that’s especially true during the pandemic, when pleasurable touch from others is not always safe or accessible to us and self-care has become more important than ever as we try to process all the painful things happening in our world. Self-pleasure can be an extremely important aspect of self-care even during non-pandemic times, and right now that is especially true.

But you may not just have theological worries.You may also have practical worries—like concerns about living with conservative Christian parents or not feeling like you know enough about your body to give yourself pleasure. Your body belongs to you, not your parents or your teachers or your pastor or the person you’re dating or anyone else. It’s understandable to feel ill-equipped, especially if you have not received adequate sex ed, but that’s why a website like Scarleteen exists! There are many resources about masturbation, sexuality and anatomy on this site, like this one, this one, and this one, just for a start. It can be frustrating to feel like you don’t have the information you need, but it is available and we and other safe folks are here to help you out.

But perhaps even more daunting than the theological and practical fears are the emotional ones. After all, it’s one thing to decide that what your parents or youth pastor told you about masturbation isn’t true—but it’s an entirely different thing to actually know that in your heart and feel it in your body and become empowered to behave differently. Sometimes even after we have changed our minds about something, it takes our bodies a lot longer to catch up. It can be really difficult to convince yourself that you are not sinning, that your body is good and deserves pleasure, and that you are in control of you. Some conservative Christians may try to call that difficulty “The Holy Spirit” pricking your conscience, but it’s really just human guilt and shame put on you by other people, and you don’t have to carry it. This takes time! It does not happen all at once.

You can’t expect to decide that exploring your sexuality isn’t a sin one day and be a totally healthy, free-spirited and sex-positive person the next day. It is a process, and it is okay if it doesn’t happen all at once. Be gentle with yourself, and keep coming back to what you know to be true.

So what can you do if these are issues you’re working through?

Not too long ago I took a self-massage and yoga workshop where we were taught how to lovingly massage our arms, our legs, our neck and shoulders, our feet, and other non-genital body parts, and I left feeling so peaceful and good about myself. Touching yourself kindly is important always, but even more so during the pandemic. You can start small and build from there if you want to!

Most importantly, it is crucial to remind yourself that if you are someone who considers yourself to be a Christian or a person of faith, your belief in/devotion to God is not at odds with your existence as a thriving sexual being. If you’re religious, imagine a deity who made bodies good—who made everything good, according to the same book of Genesis—and who strongly approves of consensual, life-giving pleasure. You do not have to settle for other people’s shriveled, disapproving notions of “God.”

Pleasure is self-care, and there is no authority figure or deity who should be able to make you feel like pleasure is not your birthright. 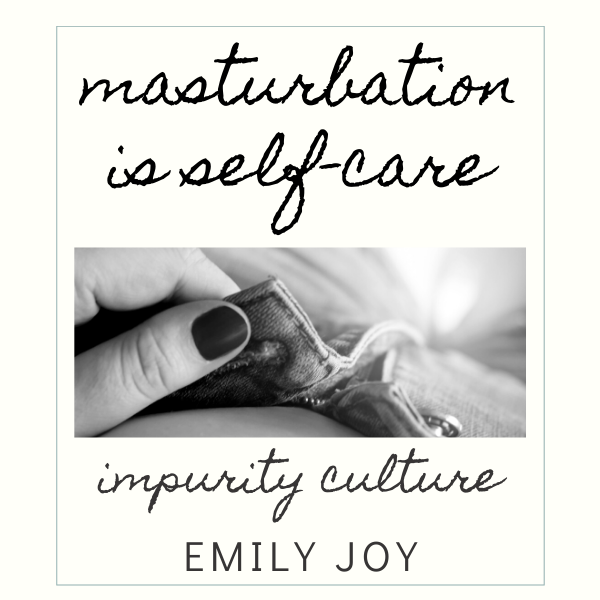