Deb Levine, BSW, MAWhen a young person comes out, the adults in their lives can have all sorts of reactions. If you're trying to be a supportive parent, here are just a few of the ways you can help them navigate those moments.

This essay is not about her, though.

Thinking back to my single days, my life was not very binary. I had a large, alternative friend group, with many gay male friends and colleagues.

One year, I went to an LGBTQ synagogue for the holidays because it was the closest one to my apartment. The rabbi told a funny story in their sermon about parenting. The punchline was, “Don’t assume you know everything about your kids. One of them might turn out to be straight!” I thought it was quite funny at the time.

Fast forward about 15 or so years. My kid comes home from 7th grade and tells me that she’s queer. She likes girls, has always liked girls, and now so many things made sense to her about 5th grade – why she didn’t join the conversations about crushes on boys, why she didn’t like pink or frills or painting her nails, why she never liked sleepovers.

My response in the moment was, “Wonderful. Thanks for sharing. It’s a good thing to know about yourself.”

Wondering what I did next? I had lunch with my favorite gay friend and asked him one question, “Did you know you were gay at 13?” He said, “Hell yeah, but I didn’t tell anyone.” He also told me how lucky my daughter was to have me as a mom.

The easy part was over. (Thanks, Steve.) Here were other people’s reactions that I had to deal with as the mom, but that I didn’t count on:

My spouse: “It’s just a phase.” My work was clearly cut out for me here after hearing his knee-jerk reaction.

My in-laws: They were just completely oblivious. To this day. More on that below.

Other parents: There were no queer kids in our friends’ circle Now, there was just an unspoken secret.

My mother: “She looks just like Sibby (one of her cousins who was a lesbian). All good.”

Cisgender, straight male partners: My husband is cool. I wouldn’t have married him otherwise. I was surprised at how ingrained his initial reaction was – to discount our daughter’s identity. The good news is that it’s completely normal for parents of teenagers to doubt their children’s stated identity as a phase, based on popular trends and fads. This is part of a parent’s coming to terms with our kids’ separation from us. However, because this was about my child’s queer identity, I couldn’t leave it at that. Which is why I told my husband about my conversation with Steve, and how LGBTQ kids know, deep in their hearts, about their sexual and gender identity at an early age.

The lessons: Queerness is not something your child will grow out of, not something a young person can or should be talked out of, and not something that you or they have the power to change. Talking this through with my spouse helped to remind me how lucky we were that our daughter communicated what she was feeling so clearly. Sexual identity is part of normal adolescent development of a child’s own identity separate from parents/caretakers, and that includes queer identities.

Grandparents: My in-laws are post-Mormon WASPs, posing as Unitarians. They were never able to see their own children as separate from themselves, so there didn’t seem to be any point to convincing them to make a leap with their grandchildren. Grampie is a nonconsensual lip-kisser, in a Mad Men kinda way; I taught my daughter to turn her head so he’d get her cheek. Our daughter said she did not want to do a “coming out” with her grandparents. We’re pretty sure that they know now, as she wears suits to formal family events.

The lessons: You don’t need to outright tell everyone in your family early on. Focus on your child and their needs and be supportive of whatever decision they make around coming out to family members. As a nuclear family, we made our own decision to spend less time with the in-laws; we see them at large gatherings and don’t leave our daughter alone with them. My husband talks to them from his office to stay in touch as they age. If your extended family members are younger, they may be more open to listening and learning. As parents of a queer child, you can pave the way by starting an adult conversation to gauge the possibilities, and if they are open, bring your child into the conversation afterward.

Other parents: Here’s where the big surprise came for me. Some of the parents in our elementary school group were queer couples. Some were with same-gender partners and then had children with an “opposite” gender partner. Some broke up heterosexual marriages in order to be with same gender partners. Liberal Accepting all the way, right? Wrong. Our daughter and our family was ostracized as she hit puberty. The teasing started among the kids, and when we approached the parents, they supported their own kids over their outward liberal values. We had quite a few family conversations about next steps, which we decided was to hunker down together and remove ourselves from long-standing family friend groups.

The lessons: Kindness trumps bullies. Stand together as a family and support your child. Become a vocal advocate among heteronormative communities to not use derogatory terms for LGBTQ kids, and to be kind and inclusive of all.  No more bystanding.

My mother: It was kinda great when my mother said that my daughter looked like Sibby. We realized that there were a lot of lesbian and gay members of the older cousins group. My mom pulled out photos from our annual summer cousins’ picnic and showed my daughter who had same-sex partners, telling stories about their lives and how different it was to be gay in the 40s and 50s.

The lessons: It felt great to be able to find ways to help my daughter fit in and to know that there were role models, right in our own extended family. Depending on who your kid is, you can look for role models in history, in your community, in your family, and within fictional stories and movies. Show them that they have always been a part of communities, and embrace them into your own family story.

One last thing: After my daughter told me she was queer and got a positive maternal response, she thought everyone would be cool with it. Remember, she was 13. I had to specifically call this out for her, and how some kids define themselves by being hurtful to other kids. Some adults are in this camp too, remaining stunted in their bigotry by being mean to anyone they don’t know and understand. I taught my daughter about how to identify safe spaces, and trusting her gut. I told her that if she was in a new club or group of kids, and she didn’t feel comfortable with them just yet, she didn’t have to share her identity right off the bat. It was her information about herself that she could share with whomever, whenever she wanted to. As for the middle school bullies out there, it was always okay to leave ‘em guessing.

My daughter is 18 now and just finished her first year of college. She wrote an amazing essay about LGBTQ scientists and how they have influenced the field, despite their history of invisibility.  She is strong and proud, a budding scientist and a community leader. Her confidence intact, she is off in the world, making it a better place for everyone. 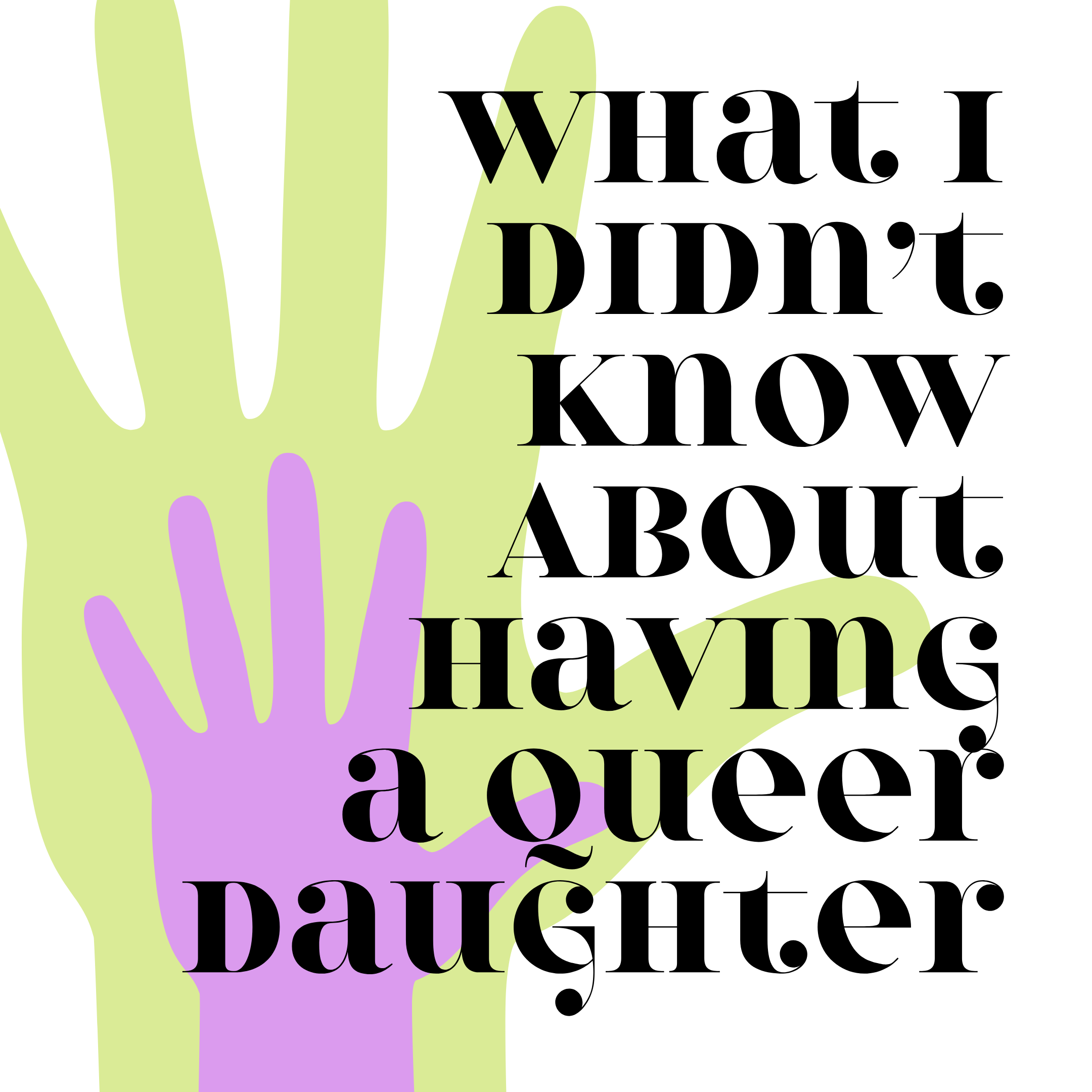