Gabriel LeãoIn an exclusive interview with Scarleteen, Amnesty International Argentina Executive Director Mariela Belski, spoke about the road to the recent abortion legalization in Argentina, sex education in the South-American country and remembering the case of the child that acted as a catalyst to the changes the country has recently made.

By the tail end of the otherwise terrible 2020, Argentina did something amazing, legalizing abortion for people who are pregnant up to 14 weeks, a progress that makes the Latin-American nation one of the most advanced in the region when it comes to human rights. Just two years before, the Senate had rejected the same measure.

However, it wasn’t an easy nor a sweet victory.  In 2019, a 11-year-old girl was forced to give birth after being raped: her pleas to terminate her pregnancy were ignored. This violent act was defined as the “worst kind of cruelty for this child” and it called attention not only to civil Argentine society, but to the whole world.

With scenarios like these, grassroots social movements increased their voice, like La Marea Verde (The Green Wave), known for their green clothes and pro-choice advocacy, and Ni Una Menos (Not One Less), a collective that opposes violence against women. A cause that has spread through many sectors of Argentine society, and Amnesty International played a pivotal role.

In an exclusive interview with Scarleteen, Amnesty International Argentina Executive Director, Mariela Belski, spoke about the road to abortion legalization in Argentina, sex education in the South-American country and remembering, in this second interview with me, the case of the child that acted as a catalyst to the changes the country has recently made.

Scarleteen (ST): In the final days of 2020, Argentina legalized abortion. What does this represent for Argentina and its citizens, particularly those who can become pregnant, in a collective and in an individual way?

Mariela Belski (MB): For more than ten years Amnesty International was campaigning for legal abortion in the world and in Argentina in particular.

Last year Argentina achieved a landmark that is a ray of light to the region: abortion legalization. We from Amnesty International consider it fundamental to secure universal access to all abortion services in order to attain reproductive, social and economic justice.

According to International Human Rights Law (IHRL), women and other people who can become pregnant should never be submitted to the penal process or forced to put their lives and health in danger when they need to terminate their pregnancy. The penalization of abortion and its restrictions not only denies the rights of being healthy and alive for women, girls and other people capable of generating life but creates a serious public health issue because it opens [the door to] to clandestine and unsafe practices that for decades were one of the major causes of maternal mortality.

Currently, we from Amnesty International consider it necessary that the State must guarantee, in all Argentine legal territory, safe and free abortion in the public health subsystem and also the private system. We are monitoring this situation from our organization.

ST: When I interviewed you in 2019, the story of the 11-year-old Argentine girl forced to give birth from a pregnancy due to rape was the subject of our conversation. Did this story influence the process to legalize abortion in your country?

MB: The story of the 11-year-old victim of rape that was obliged to keep a forced pregnancy was a very strong story in Argentina and the world. Also, this story it had published confidential medical information stressing further the chain of the youngster’s violated rights. Without a doubt, the propagation contributed to the visibility of the systematic violation of sexual and reproductive rights of women and girls by all sorts of Argentine authorities.

We from Amnesty International supported the visibility of this story in order to bring awareness about the need to change our legislation. We demanded the accountability of the provincial state and sued the authorities in Tucuman (the Argentine province where the story took place) demanding respect for the rights of the girl.

The multiple cases of violated rights, the stories of girls and women that had put their lives in risk and the activism of “La Marea Verde”, undoubtedly contributed to sanctioning the law in 2020.

ST: Many members of the medical community in Argentina hail from the upper class, and I feel Argentina is a very Catholic and conservative country. Did those sectors oppose the legalization? What did that look like, if so? What groups supported it most?

MB: I wouldn’t dare to claim that in a general way “Argentina is a very Catholic and conservative country.” As with every complex society, it has diverse cores of social composition. For example, there are conservative doctors but there are also many that work day-after-day with women in vulnerable situations and understand that rights have to be secured.

In reality, there are doctors, health workers and many members of [the healthcare worker community] that oppose the legalization of abortion. Still, in this opportunity – different from 2018 (when the Senate didn’t approve the abortion legalization) – there was political will to approve the law. Another strong argument was positioning the struggle for legal abortion as a common agenda issue, transversal to many different political forces. All this, added to the relentless struggle of women’s movements, human rights, social and syndical organizations, and also the activism of thousands of young folks, were some of the many reasons that by the end of 2020 Argentina became the biggest country in the region to have a legal abortion law.

ST: How important was the participation of grassroots movements like La Marea Verde and Ni Una Menos to achieve this outcome?

MB: Over all these years, hundreds of thousands of women and girls joined forces to ignite the legislators of Argentina to not punish abortion and to secure safe access to medical services to interrupt pregnancy. Those women are part of a great campaign. They hail from many movements and organizations like Amnesty International Argentina, and are united in their struggle to make a change. The grassroots movements were key players to this historical progress.

Ni Una Menos marked a milestone in the participation of the new generations regarding the gender and human rights agenda, giving start to new ways and advocacy spaces. This has helped to prepare the terrain for the historical mobilization by the movement fighting for legal abortion, La Marea Verde, marking an inflection point in the revindication for the women’s reproductive autonomy rights.

MB: In spite of the implementation of obligatory sex education in all Argentine schools since 2006, many youngsters from the country are still without access to the basic knowledge of their sexual rights.

The effective implementation of the Integral Sexual Education (ESI) is a vital tool to secure that young folks know their rights and are able to speak more openly about their sexuality, to live it freely and to show more respect towards sexual diversity among their peers. The Integral Sexual Education contributes to diminish unintentional teenage pregnancies and to prevent sexually transmitted infections.

ST: Do you think accurate sex education could help Argentines understand how relevant it is to have access to legal abortion and contraception?

MB: …Integral Sex Education is vital for making free and informed decisions about one’s own body. To be able to decide if you want to have children or not, when and how, is essential for health, wellbeing and full realization of the human rights of women, girls and any person able to become pregnant.

That is why, we from Amnesty International campaign in order to young people to become aware of their rights and then to be able to make informed decisions about their own bodies. This is followed with sexual and reproductive rights formation workshops and the empowerment of young people to attend the workshops in pairs, leading to them becoming change agents to promote and protect reproductive and sexual rights. We also stimulate the participation of the youngsters in political decision spaces, so their experience and opinions are taken into account in the development of public policies.

The work strategies aimed at youth enables them to lead incident strategies to promote Integral Sex Education (ESI). In this sense, we are part of the open government process to monitor ESI and were able, for example, to make the Buenos Aires City Government responsible to provide information on the ESI implementation. In a national scope we have contributed to the creation of the Federal Observatory of ESI.

ST: Argentina is the largest Latin American country to pass this abortion legislation. Do you believe other countries in the area will follow the same path?

MB: Our country has historically, and still has, a strong role to enforce the regional law agenda to amplify rights and it is expected that this progress impacts countries like Mexico, Chile, Peru, Colombia and Dominican Republic, where women’s movements are also getting stronger.

The story of the sanctioning of the law permitting the termination of a pregnancy up to 14 weeks of gestation in Argentina is an achievement that can inspire other countries of the region and the world to advance towards recognizing the access to legal and safe abortion to the realization of the human rights of women, girls and people who can become pregnant.

It is a victory of the women’s movement in Argentina that for decades has been battling for their rights. Now, the people that decide to stop their pregnancy will be able to count on with a safe and improved service. We believe, as society, that this, decidedly, will be a beacon for the region. We from Amnesty International will work in order for the State to guarantee legal abortion in the whole country.

ST: Is there anything else you want to mention?

MB: The acknowledgment of the right to abort that enables the voluntary termination of a 14 weeks pregnancy is absolutely a historical step to the fulfillment of the human rights of women, girls and other pregnant people, still there are important challenges ahead to secure its effective implementation.

The Argentine law incorporated at a federal level recognizes abortion and post-abortion care as a free and obligatory services from the Health System that must be given by public and private agents under 10 days since it is solicited and following every recommendation from the World Health Organization (WHO). So, in this way, the law establishes a basic set of rights that have to be secured in the whole country under equal conditions.

Regardless of all the democratic consensus achieved, there are still some sectors that try to put obstacles in the way of access to legal abortion. Without doubt, we still have arduous work ahead to defend the law and demand active policies for the effective implementation of the law in every province in the country.

For an effective exercise of the right to terminate pregnancy, it is imperative to conduct massive campaigns in order for those who have the right to be able to access real and reliable information and to allow them to have tools to exercise their rights. It is also necessary to strengthen the access to Integral Sex Education and to form health workers with gender perspective as also the teachers and the agents in the Justice System. 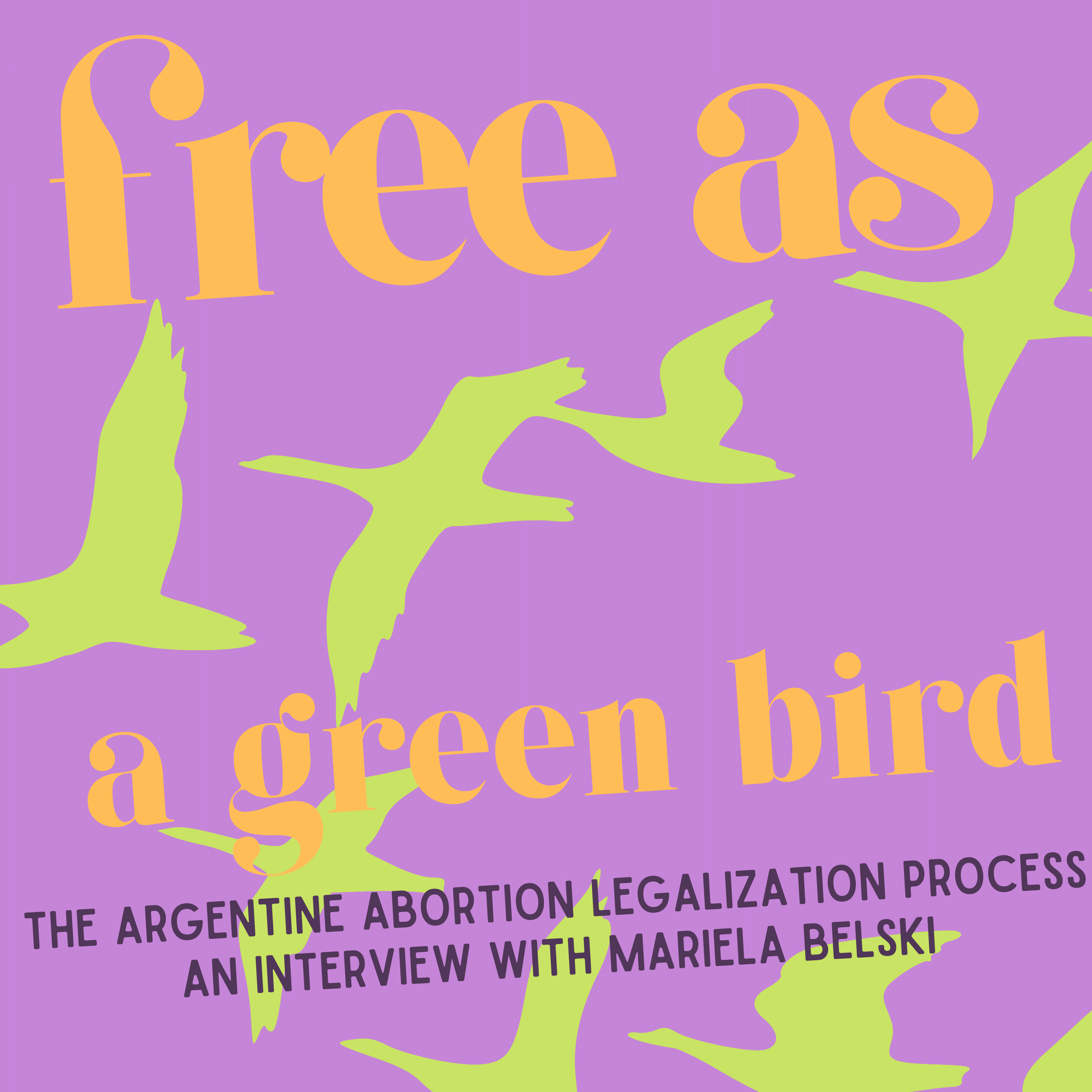